I is the NME / mighty fallen

I remember when you’d get the likes of Bogshed on the front cover of the NME - and that was back in the days when the NME was a big deal and competing with Sounds and Melody Maker.  But this week it has a lad in a suit on the front with the headline ‘this is suiting’ (whatever that might mean) – it’s an advert for Topman.

How are the mighty fallen eh?

Given the way the modern world is mind, I can just hear someone claiming that the lad in the suit is not actually on the cover but on the ‘wraparound’ or some-such logic-defying made up ad-speak.  Call me out of touch but to me the front cover is the thing that’s on the actual front of the magazine, the bit that you see without having to open it.  You know, the front.  The cover.  The front cover.  And not what's hidden inside.

I’m not blaming the NME for this state of affairs by the way but it’s still sad to see.  I doubt whether the old NME would have had a full-page advert for DFS settees in it either (or cars) but there you go…

The cover does tell me that it’s now OK again to wear white socks.  About time, I never had a problem with them.  Mind you the suits are too skinny and the trousers too short even for a 20 year old.  So there.

Who’s on page 3?  Jimmy Clitheroe.  My name for Biffy Clitheroe.  Or Clyro.  I bet their publicity people tell the world that they're on the cover of the NME this week.  Unfortunately they're not.

Weather what they tell you is true or not...

I'm not particularly comfortable moaning about the weather forecast but well, today...

Today I heard them saying on Radio 4 at about 8.30am that the weather 'in the North of England' was grey and cloudy and showery and would stay that way.  In fact it was bright and sunny with hardly a cloud in the sky.  People were remarking about what brilliant weather it was.  At a couple of points during the morning I checked various on-line weather sites including the BBC.  Many of the forecasts had those graphs divided into hours - and all of them said that in Leeds it was cloudy and raining.  WTF? (Oh that's 'Want That Fashion' according to a hoarding I passed today - they're just so darned clever those advertising types y'know?!)

Did none of them have a single intern or anyone at all who could look out of the window and work out that they were completely wrong?

In the end the weather did turn bad (some time in the afternoon) but it's a really surreal experience to be told by authoritative voices on the radio and usually reliable on-line sources like the BBC that black is actually white, or rather bright blue skies are actually grey rainy skies.

Maybe it was a glitch in the Matrix or tax haven money being re-shovelled about that caused the world to shift off its axis slightly...Shows that our super duper ever so modern 24 hour rolling weather world is not as advertised though...
Posted by John Parkes at 9:15 pm No comments:

There exists in the world such a thing as Moisturising Gel Reflexology Socks.

“Comfort Essentials” apparently…I thought it essential that I tell you this fact.  I expect the UN will add this to the list of things a person needs that are essential along with drinkable water, shelter etc.
Posted by John Parkes at 6:29 am No comments:

One for apostrophe fans'

There you go apostrophe fans, pick the bones out of this one - Cleethorpes sea front btw... 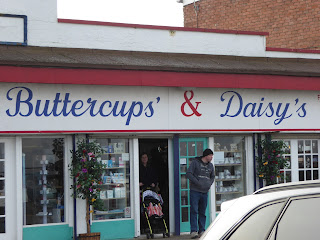 Posted by John Parkes at 7:41 pm No comments:

I caught a glimpse of a TV listings magazine this week.  I think I may have to stay in on Thursday.  Channel 5 have "Botched Up Bodies - Big Boobs Gone Bad" followed immediately (actually after 10 minutes of adverts I imagine) by "Baby Faced Binge Eaters".

And they say that television is shite nowadays...
Posted by John Parkes at 7:35 pm 1 comment: