I’ve been meaning to have a go at the follow-ups to the ludicrous Lloyds bank adverts – yet another of those where they show people turning from attractive children to attractive ‘older people’ via being attractive adults.  And rescuing teddies and stuff.  Lloyds is the one (I think) where a big horse gallops through the maternity ward and whatnot.  At one point the horse gallops past a couple in the street.  A (presumably) gay man is clearly proposing marriage to another (presumably) gay man.  He’s decided to do this in the street while a horse runs past.  As you do when you're pretending to be gay in an advert.  He’s gone for the whole 'ring in a box down on one knee' thing.  In the street.  Any homophobics are presumably too busy looking at the horse to cause any aggro.  Or he can’t think of a better place to do this than in the middle of the street.

Something tells me that this couple were originally going to be a heterosexual couple.  Bet your life someone at the advertising agency simple squeaked with delight at the whole instant inclusive right-on ness of making them a gay couple.  Then they squeaked even louder and treated themselves to a game of ping-pong instead of lunch when it occurred that they could make one of them black.  Should have also put one of them in a wheelchair but they clearly never thought of adding that particular egg to the advert pudding.

But then!  Then someone suggested that they go for that whole the fuckwitted British Public love a character thing.   They spend hundreds of pounds on insurance to get a meerkat toy, they really really love that opera singing insurance bloke and they’d sell their own grandmothers for one of those Brian toys.  Then they ‘like’ the Facebook page and Tweet their friends and talk to their mates about how they’ve taken these lovable characters to their hearts because they’ve clearly got nothing else going on in their lives…

So…if you’d like to believe that the fictional characters in the advert are real in some way and that there was a proposal and ‘he said yes’, go on, knock yourself out.  If you’re lucky there’ll be a Facebook page about them which you can ‘like’.  You can Tweet your friends about them and possibly follow their progress.  Choose the wedding venue and what they’ll wear and the kind of sex you’d like them to have.

Actually, I think there can’t be more than half a dozen simpletons who care and actually this is just the advertising industry milking another doltish (or coltish in this case – boom boom!) company into thinking that even though they screwed up the economy and everyone hates them that if they make up a gay couple one of whom is black then everyone will just love them.  Unless we haven’t got every penny of our money back.

In which case we still hate them.

And look!  Get that damned banky horse out of the maternity ward!  Please don't bother to check the advert out though.  You'll need really sturdy buttocks well used to clenching.  And it'd only encourage them... 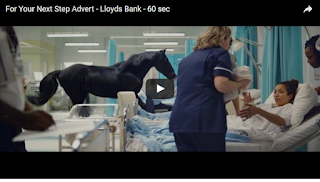 The Leeds University Alumni people have been in touch again.  This time they want a donation of (at least) £50 to fill in the gap caused by the government phasing out bursaries for students from low income households.

This is where we are folks.  Decades of moving away from public towards private, from education for civilisation’s sake to education merely to feed the economy, from tax rates sufficient to fund students to massive student loans.  There’s also this fantasy that anyone who goes (or went) to University must be somehow on the upper-middle class gravy train that still sort of exists and that they’re prepared to stump up a few quid to cover government cuts.  Perhaps we should have a raffle to fund a replacement for Trident or to fill the hole caused by those firms who don’t pay any tax?

I don’t really blame the Alumni people – but no, sorry, I haven’t got £50 spare anyway, never mind £50 to cover the cost of moving the country’s wealth to the rich.
Posted by John Parkes at 5:26 pm No comments: